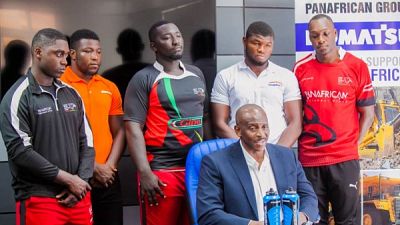 Mr Herbert Mensah, President of Ghana Rugby, announced the Ghana Rugby Men’s Sevens squad that will go to Tunisia to compete in the 2018 Rugby Africa Men’s Sevens Tournament in Tunisia on 13 and 14 October 2018.

The announcement of the Ghana Rugby Eagles National Men's Sevens Team for Tunisia by the President of Ghana Rugby, Mr Herbert Mensah: http://bit.ly/2yef9VG

“The decision was not an easy one with so many players who worked incredibly hard and who could probably all have represented Ghana. At the end of the day we had to choose and the squad of twelve on whose shoulders the responsibility now lies to go and make Ghana and all Ghanaians proud are: Abdul Jalilu Yussif, Alexander Dorpenyo, David Acho Nartey, Emmanuel Kalos, Francis Kweku Mensah-Donkor, Gideon Klugey, Jason Dzata, Kofi   Montchon, Kofi Anarfi Anokye Appiah (SA), Michael Acquaye, Selom Kwame Gavor (SA) and Yaya Lukman,” Mensah announced.

The Ghana Eagles will depart for Tunisia on 6 October 2018 with Royal Air Maroc and will camp in Tunis till the 11th of October when they will join the other eleven teams of this year’s Rugby Africa Men’s Sevens Tournament in Monastir.

The 12 teams for the 2018 Rugby Africa Men’s Sevens were drawn in four pools with the Ghana Eagles facing the formidable challenge of beating Uganda and/or Senegal in order to proceed to the quarterfinal playoffs.

The Pools for the tournament are:

Ghana’s Pool matches will be played on Saturday 13 October in Monastir at 11:22 local time against Uganda, and 13:12 against Senegal. Fans and supporters in Ghana will be able to watch the matches at 10:22 and 12:12 on channels that are still to be announced.

The UK based technical advisory team of Stuart Aimer (S&C Coach) and Collin Osborne (Skills Coach) will join the Ghana Eagles in Tunis on 6 October to take part in the last mile preparation for what will be a very tough competition.

According to Mensah Ghana Rugby has worked extremely hard to get to this point and to achieve full membership of World Rugby and to win both the fifteens Regional Challenge in 2017 and the Rugby Africa Bronze Cup earlier in the year Elmina, Ghana.

“We have also held our 2018 Annual General Meeting and it is clear that there is so much to do with so little resources. We continue to rely on the private sector in knowledge that Government is not yet ready to meaningfully support the development of sports outside soccer,” Mensah said.

Distributed by APO Group on behalf of Ghana Rugby Football Union.
Media Contact:
Rugby@APO-opa.org
About Ghana Rugby:
Ghana Rugby is the official full member of both World Rugby (2017) and Rugby Africa in Ghana-West Africa and is responsible for the management and development of the Game Rugby Union in the country. The Union is governed by a Constitution and administers five KPAs (Key Performance Areas) namely: (1) Youth Development & Growth through the World Rugby “Get Into Rugby” Programme, (2) Women in Ghana Rugby, (3) Training & Education, (4) Domestic Competitions and (5) International Performance.
Media files

Download logo
Herbert Mensah, President of Ghana Rugby, addressing the media with some of the Ghana Eagles who will be representing