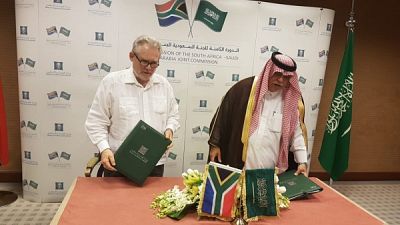 The Minister of Trade and Industry, Dr Rob Davies has returned to South Africa following his visit to the Kingdom of Saudi Arabia where he co-chaired the 8th Session of the South Africa – Saudi Arabia Joint Economic Commission (JEC). The Saudi side was chaired by HE. Dr Majed Abdullah Alkasabi, Minister of Commerce and Investment.

The JEC reached agreement to cooperate on various areas ranging from Energy, Industry, Mineral resources, Finance and Banking, Agriculture, Tourism, Transport, etc. An agreement was also reached to cooperate on social areas like Education, Sport, Health, Labour, amongst others.

In the area of Energy, agreement was reached to finalise an MOU on renewables between the two countries. This will advance closer cooperation and exchange of expertise in this field. ACWA Power from Saudi Arabia already invested in a solar plant in Bokpoort, Northern Cape which is operational. ACWA Power is at an advanced stage to build another renewable energy plant in the Eastern Cape.

Minister Davies addressed a South Africa- Saudi Arabia Business Forum that was hosted by the Riyadh Chamber of Commerce.   His programme in Saudi Arabia included a number of bilateral meetings with relevant Saudi Ministries and Investors such as ACWA Power

South Africa and Saudi Arabia maintain good political and economic relations and cooperate in a number of fields. Saudi Arabia continues to be SA’s strategic partner in the Middle East region and is South Africa’s 2nd largest trading partner and largest source of imports from the Middle East region. Globally, Saudi Arabia is among South Africa’s top 5 import partners, largely due to the amount of the oil we import from the Kingdom. SA’s exports are led by mineral product, automotive, base metals, machinery and mechanical appliances.

Davies was accompanied by a delegation of senior government and state-owned enterprises (SoE) officials, as well as a business delegation.

The purpose of the dialogue is to facilitate and foster open discussion between the government and the private sector, including beneficiaries of the Black Industrialists Scheme (BIS), on means and ways to strengthen collaboration, and share lessons learnt during the initial roll-out of the scheme.

Download logo
Minister Rob Davies and his Saudi counterpart, Dr Majid Bin Abdullah during the signing of the JEC minutes