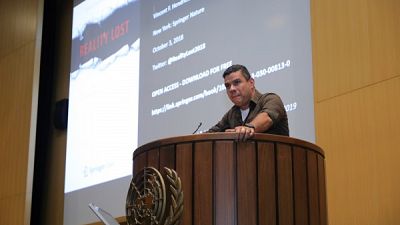 Statisticians were on Wednesday urged to do more to explain and sell their work to ensure their product helps African governments to make informed policies that can change communities and democracies for the better.

This was said by Vincent F. Hendricks, a Professor of Formal Philosophy at The University of Copenhagen, Denmark, in a captivating keynote address at the on-going Sixth Statistical Commission for Africa (StatCom-Africa VI), which is being held under the theme; Enhancing the Capacity of National Statistical Systems to support policies for Africa’s economic diversification and industrialization.

He said in the era of fake news and populist politicians, statisticians should be aware of the threat to evidence-based policymaking.

“We as scientists do not like to sell ourselves or our product thinking that it will sell itself because its value is self-evident but it doesn’t work that way in the real world. In this world we live in today of fake news you have to realize that you are the experts and not the politicians; take ownership of your data and use it not only to change your communities but also your democracies,” he said as he warned the experts of the risk of digital totalitarianism.

Mr. Hendricks, who’s the Director of the Center for Information and Bubble Studies, said statistics would lose the battle of ideas if data producers did not go out there to sell it, adding statisticians should not only generate data but use it for the good of their communities.

“Say what it is that you do and why is it important. Put pressure on politicians and governments by showing them the hard evidence as to why it matters; put things into perspective. If you are not the ones who put a very high bar on this issue then it is not going to be done,” he said.

“You are the ones informing democracy; you are the ones who are making sure that evidence-backed policy is not just a mystery. That is what you do. If you do not go out say it accordingly, you are going to lose that authority in this attention game and when you lose, your states lose and your populations lose. So put the bar really high and do not be afraid to get out there as long as you are truthful with the information but if you start doctoring it you lose your authority in seconds.”

Mr. Hendricks added the experts needed to do more to push their governments to fund statistical development on the continent.

“Correct information and democracy are tied together very very intimately. That’s the reason why you are in statistical agencies so you can do evidence-based policy making. That’s the very reason you are here. Never forget because without correct information democracies don’t run – they are particularly sensitive to misinformation as you have seen in the U.S., France, Italy and others,” Mr. Hendricks added.

At the end of the keynote address, Mr. Hendricks launched his new book, REALITY LOST, which he co-authored with Mads Vestergaard.

REALITY LOST: Markets of Attention, Misinformation and Manipulation is an analysis by the two philosophers of the nuts and bolts of the information market, the attention economy and media eco-system which may pave way to post-factual democracy. Here misleading narratives become the basis for political opinion formation, debate, and legislation. To curb this development and the threat it poses to democratic deliberation, political self-determination and freedom, it is necessary that we first grasp the mechanisms and structural conditions that causes it, posit the two.

A democracy is in a post-factual state when opportune political narratives but factually incorrect information replace facts and evidence as basis for political debate, opinion formation and policymaking, Hendricks and Vestergaard agree in the book.

The media is being flooded by populist narratives, fake news, conspiracy theories and make-believe, they say in the book. “Misinformation is turning into a challenge for all of us, whether politicians, journalists, or citizens. In the age of information, attention is a prime asset and may be converted into money, power, and influence – sometimes at the cost of facts.”

“The point is to obtain exposure on the air and in print media, and to generate traffic on social media platforms. With information in abundance and attention scarce, the competition is ever fiercer with truth all too often becoming the first victim.”

Heads of National Statistics Offices, representatives from national, sub-regional, regional and international organizations, inter-governmental organizations, NGOs, the academia and research institutions and the private sector are attending the four-day meeting.