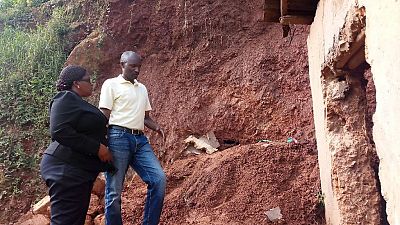 Rwanda’s minister for disaster management and refugees has urged citizens in disaster prone areas to to dig holes retaining rain water around their houses in order to mitigate loss and damage from heavy rains and mudslides.

The minister was visiting and condoling with residents of Gasabo district where up to eight people died due to landslide caused by heavy rains overnight on Monday. There were more deaths reported in Rulindo and Gatsibo districts, bringing the total number of lives lost to eighteen.

“Eighteen people passed on due to disasters caused by heavy rains in the night of 23rd April,” Rwanda’s ministry in charge of disaster management said on Twitter.

Eighteen people passed on due to disasters caused by heavy rains in the night of 23rd April.

The ministry was still assessing the extent of damage from the heavy rain.

The East African nation, dubbed a country of a thousand hills, has recently been affected by landslides as a result of heavy downpours flattening houses on mountain slopes.

The government has in the past urged Rwandans who live on mountain slopes to move to areas less prone to disasters.

Monday’s toll follows the deaths of 51 people in heavy rains and lightning between January and mid-April, the ministry said. That toll included 16 people who died when lightning struck a church in March.