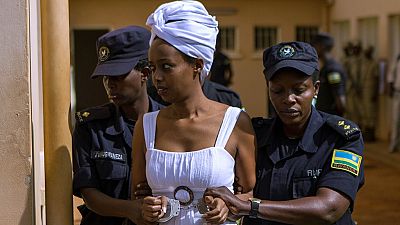 The mother and sister of a prominent critic of Rwanda’s president said on Friday all three of them had been tortured and deprived of food as they were held in jail on charges of forgery and inciting insurrection.

Adeline Rwigara told a court she and her daughters were handcuffed day and night.

She is being held alongside her daughter Diane Shima Rwigara, a 35-year-old accountant who tried to stand against President Paul Kagame in August elections.

Diane Rwigara, who is accused of faking the registration papers for the election, was eventually barred from running and Kagame went on to win with 98.8 percent of the vote.

She has repeatedly accused Kagame of stifling dissent and criticized his Rwandan Patriotic Front’s tight grip on the country since it fought its way to power to end Rwanda’s 1994 genocide.

Kagame has repeatedly denied cracking down on dissent. Justice minister Johnston Busingye on Friday declined to comment of the torture allegations, saying they were a matter for the court.

“Since August 29, I and my children were tortured,” Adeline told the panel of three judges.

“We were handcuffed day and night, without eating or drinking,” Adeline said, adding they had once gone without food and medication for a week.

“Imagine staying in a closed room for 24 hours without access to fresh air. At least allow us to bask in the sun for 30 minutes and be visited,” she said.

Diane Rwigara was in court but did not speak.

In response, prosecutors told the court that the defendants’ rights were respected, without commenting on the torture allegations.

Asked by Reuters to respond to Rwigara’s torture accusations, Minister of Justice Johnston Busingye said: “Issues raised in court are determined by the court. If there is a claim of torture in court, the court is the proper place to examine it and determine what happened.”

The trial will resume on Monday.