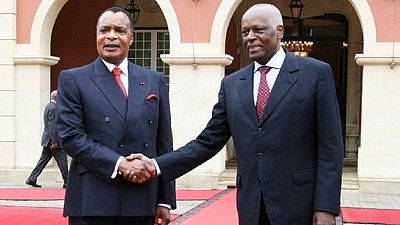 A message accompanying a photo posted on the MPLA’s Twitter handle read: “President Dennis Sassou Nguesso pays homage to José Eduardo dos Santos, for his deeds for peace in Africa.”

Dos Santos, 75, bows out as president after 38 years in charge of the former Portuguese colony. He is set to be replaced by his former Defense Minister, Joao Lourenco, who led the ruling MPLA into the last elections.

President José Eduardo dos Santos deserves all the praise, because he turned a country ruined by war into a prosperous nation, introducing, in time, the necessary reforms, especially in the diversification of the economy.

The National Electoral Commission (CNE) on Wednesday (September 6) confirmed the party’s victory in the August 23 polls. MPLA polled 61.07% of votes and won 150 seats in the 220-seater legislature.

Sassou on his part won polls in March last year to extend his stay in office. The 73-year old came to power in the same year as dos Santos, 1979. He, however, left power for a five year period between 1992 and 1997.

Sassou’s second term was due to expire in 2006 but a referendum scrapping presidential limits was held in late 2015. The ‘YES’ vote allowed him to run for another term of office. He is on record to have said he will not be president for life but that his current mandate was from the people of Congo.

Before Sassou, a former Mozambican President Joaquim Chissano also congratulated dos Santos for deciding to bow out as president. Chissano, who served the as president between 1986 to 2005, said the decision to retire was timely especially in an economically viable period.

“He made the decision because he thought it was a good time for the Angolans. I also did the same when I was convinced it was time to retire,” he said in the Angolan capital Luanda where he had arrived for election observer duty.

“President José Eduardo dos Santos deserves all the praise, because he turned a country ruined by war into a prosperous nation, introducing, in time, the necessary reforms, especially in the diversification of the economy,” he was quoted by the Angolan news agency.