5 arrested, including 3 soldiers over Ivory Coast army base attack 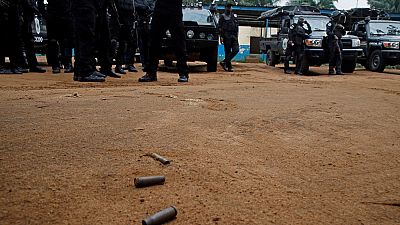 Authorities in Ivory Coast have arrested five people, including three soldiers, over an attack and arms theft at the base of an elite security unit last week, senior security officials said.

Gunmen, some of them in uniform, attacked the base, housed inside the national police academy in the main city, Abidjan, on July 19, killing an officer, stealing weapons and then fighting security forces in another part of the city.

Video surveillance footage of the attack helped lead to the arrests.

“Several individuals have been arrested … including the principal actors,” the head of the national police, Youssouf Kouyate, told a news conference broadcast on state television late on Tuesday.

He said the weapons stolen during the attacks had been recovered, and that among those arrested were two active duty soldiers as well as a third member of the army currently on medical leave.

One of them, identified as Alain Sery Doua, was shown on television in handcuffs delivering a confession.

Interior Minister Sidiki Diakite, who was also at the news conference along with Defence Minister Hamed Bakayoko, said the same group was responsible for a similar attack on a gendarmes base in the town of Azaguie two days later.

Ivory Coast has been viewed as a post-conflict success story after emerging from a decade of turmoil and a 2011 civil war as Africa’s fastest growing economy and attracting a flood of interest from foreign investors.

However, last week’s raids came on the heels of months of military mutinies that have tarnished that image.

They also raised security concerns just days before the start of the Jeux de la Francophonie, a 10-day event expected to involve the participation of some 3,000 athletes and artists from around the French-speaking world.