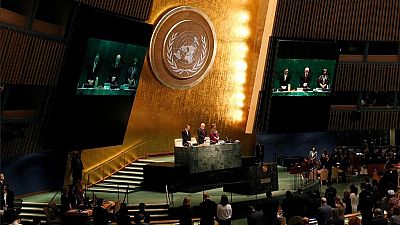 The United Nations on Monday upheld an attempt to block creation of an independent expert to challenge violence and discrimination directed at homosexuals and other persons based on gender identity in the U.N. General Assembly human right committee.

Some African states, led by Botswana, had retroactively sought to block the work of Vitit Muntarbhorn, whose mandate came into effect on November 1 as the first U.N. Independent Expert on the Protection against Violence and Discrimination based on Sexual Orientation and Gender Identity (SOGI).

The position was created by the Geneva-based U.N. Human Rights Council last June.

No nation or group of nations should pretend to hold a monopoly over cultural norms and therefore seek to impose those values on others.

“No nation or group of nations should pretend to hold a monopoly over cultural norms and therefore seek to impose those values on others,” Botswana’s U.N. ambassador Charles Thembani Ntwaagae told the committee.

The issue of LGBT rights is a divisive one among the organization’s 193 member states. The U.N. said homosexuality is still a crime in more than 70 nations.

Some countries oppose homosexuality based on religious or cultural grounds.

Botswana had proposed a resolution to delay Muntarbhorn’s appointment until at least next September, so member states could confer further on whether there is a basis in international law for establishing the position. The amendment had support from Russia, as well as many Muslim countries.

South Africa was one of the few African states that did not support delaying Muntarbhorn’s appointment.

“South Africa is still healing the deep wounds caused by racial discrimination. We are not going to add fresh wounds to these wounds we are trying to heal in South Africa,” their envoy said.

Latin American states, supported by many Western countries, submitted an amendment to the resolution deleting the request for the postponement. That amendment was adopted, as was the revised resolution, allowing the appointment to go forward.

Nearly 800 civil-society groups signed an open letter calling on states not to block the SOGI appointment.