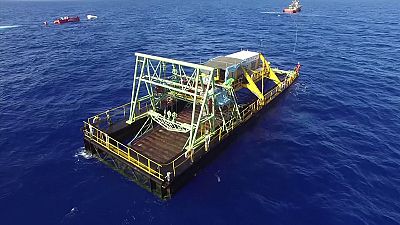 A generator is slowly towed out into the ocean off Pingtung County in eastern Taiwan.

Where the blades are gently dropped into the sea from a multi-functional platform where they will capture energy from the Kuroshio Current, which will then be converted into electricity.

Professor Chen Yang-yih, is the Vice- President of National Sun Yat Sen University:“No experiment made over any oceanic current has been successful in the world until now. But we have been successful. And we were able to produce 26.31 kilowatts of power with 1.27 metres per second of ocean current.”

Professor Chen continues: “As long as the earth revolves around itself, there will be ocean currents. The speed of these currents is stable. Their directions are also fixed.This is why ocean currents are sustainable resources. The kinetic energy of the currents becomes mechanical power, which is transformed into electric energy. And it continuously produces electricity.”

The professor says his aim is to produce enough electricity through oceanic currents to replace nuclear energy in Taiwan.

Nuclear energy currently amounts to 16 percent of the total energy that Taiwan consumes.