Canada's week-old wildfire could rage on for months 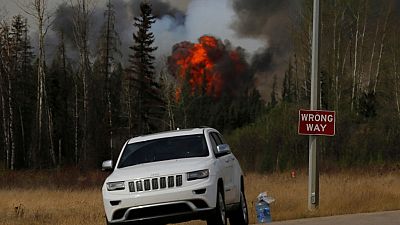 One week on and the raging fire shows no signs of being tamed. The wildfire outside Fort McMurray in Canada is now heading towards the neighbouring province of Saskatchewan.

Officials warn that without a significant amount of rainfall, the blaze could last for months.

We all have to be alert. This remains a big out of control dangerous fire...But you just can't assume anything about this.

“We all have to be alert. This remains a big out of control dangerous fire…But you just can’t assume anything about this. It is not yet under control and this is still a highly dangerous situation,” said Ralph Goodale, Public Safety Minister.

More than 40 fires are ripping through Alberta’s forests, with 12 new ones igniting on Saturday alone. Hot, dry winds are propelling the blaze northeast, threatening the country’s oil sands project.

Around half of the country’s crude production from the sands had been taken offline as of Friday.

Large parts of Fort McMurray no longer exist, with more than 1,000 homes destroyed in the fire.

Almost 100,000 residents who have fled were warned that they won’t be able to return home anytime soon.