For the past few days, many trucks like this one have been leaving this secret location in Tunis. Inside these containers, electoral material bound for the whole country and beyond.

Tunisia is holding its legislative elections in a week's time, on December 17. So this is where members of the electoral commission prepare and check ballots and ballot boxes.

More than 1,000 candidates are running for the elections, which most political parties have called for a boycott. They believe that their role has been greatly reduced since the reform of the Constitution wanted by President Kais Saied after his forceful coup last July.

The new parliament will be composed of 161 deputies, but its powers will be very limited.

Tunisia is also in the grip of a deep financial crisis which has resulted in recurrent shortages of basic products (sugar, milk, rice, etc.) in recent months, and galloping inflation of 9.8%, according to the latest official figure published in early December. 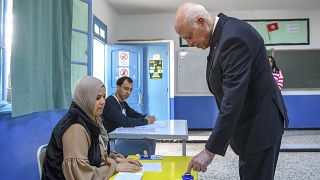