Cuban women athletes in boxing gyms are celebrating the authorities' decision to allow them to compete for the first time, following the announcement on Monday.

Boxers like Legnis Cala Massó, 31, said this is the day she's been waiting for since she started to box seven years ago.

"Saying that boxing is not for Cuban women – that's always been the problem," she said, leaning on the side of a blue boxing ring in downtown Havana. "Where we are now, we never thought we would get here."

Cuba is known worldwide for boxing, home to many legendary male boxers and owner of dozens of Olympic medals in the sport. Félix Savón, Teófilo Stevenson and Julio César La Cruz are amongst the most renowned.

But the island has also sparked controversy by not allowing women to compete, despite permitting them to do so in other contact sports like taekwondo and wrestling.

Perhaps most notably in 2009, the former head coach of Cuba's men's team Pedro Roque, told a group of journalists that "Cuban women are there to show their beautiful faces, not to take hits."

It was a sentiment Cala Massó and other women who have embraced the sport have rejected as they've sought to change the rules.

Cala Massó began boxing in Havana with just one other woman, spending long hours training despite being turned away by many coaches and boxing rings. With time, interest in boxing among women has only grown.

On Monday morning, Cuban officials announced in a press conference that they were doing just that, explaining they would hold a competition of 42 women boxers in mid-December to choose 12 athletes for a women's team.

The team, they said, will compete in the Central American and Caribbean Games in El Salvador, their first international debut. The competition will be a first step toward the 2024 Olympic Games in Paris. Women were first allowed to box in the Olympics in 2012.

Cala Massó, who now trains with five other women, hopes the decision means their community will only grow.

The announcement comes shortly after Cuban boxers made a comeback in May in Mexico, with male boxers competing on an international stage for the first time in 60 years.

22-year-old Giselle Bello Garcia, who boxed alongside Cala Massó after having only started boxing one year earlier for exercise, said the news offers them a chance to show what they're made of.

"I have a new hope for life, because my life has changed. From now on, I'm going to focus solely on boxing," she said. "I want my whole life, up until my death, to be connected to boxing." 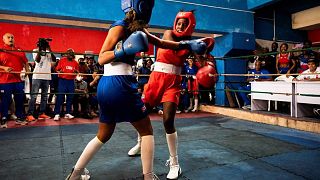