Religious leaders met on Saturday in Goma following the violence that resulted in at least 50 deaths in eastern DRC.

On Thursday, the military accused the M23 rebel movement of the deaths and breaching a recently brokered ceasefire.

"Our effective commitment to the inter-faith project for peace in North Kivu, our support for the authorities of the province in their efforts to seek peace and the peaceful coexistence of communities, our appeal to all of the faithful, in particular the population in general, to get involved in the promotion of peace."

"Our determination to say each week in our parishes and mosques a common prayer on the ecumenical peace of the French saint of Assisi", said Rev. Samuel Ngahiembako, President of the ECC (L'Eglise du Christ au Congo: Church of Christ in Congo, Ed.)

Local resident Amani Fundiko, added "I have so many worries because we have no peace, no joy to see our compatriots being killed in Rutshuru, Runyonyi, Rugari, everywhere there, our wish is that the President takes decisions to take charge of this situation and see if they can put an end to the M23, even look at the Goma-Rutshuru road, it is blocked. The situation is very complicated and we are hungry", he said.

The M23 rebel movement re-emerged last year in November claiming the government had not stuck to the terms of the peace deal. 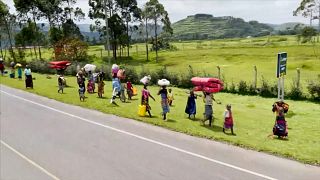