A military parade, punctuated by demonstrations of retaliation to attacks relatively unprecedented in their scale, was organized Thursday in Bangui, under very high security in this country in civil war since 2013, reported AFP journalists.

In a speech on the radio, President Faustin Archange Touadéra had promised the day before that the 64th anniversary of the proclamation of the Central African Republic on December 1, 1958 (independence from France dates from 1960, editor's note) would be placed under the sign of "security.

And this three days after an unidentified plane, which left for a neighboring country, bombed, according to the government, a camp of Central African soldiers and their Russian paramilitary allies in the north of the country, in Bossangoa, without causing any victims.

Only a few hundred people, handpicked and rigorously searched, were allowed to enter Avenue Barthélémy Boganda, where the parade was held in the presence of President Touadéra, who was surrounded by a triple curtain of security consisting of numerous Central African soldiers, Rwandan UN peacekeepers, members of special forces provided by Kigali and Russian paramilitaries, all heavily armed.

Soldiers simulated blank-fire exchanges on an imaginary front line after rappelling from a helicopter, or an air defense operation.

The site was permanently overflown by video surveillance drones, and Russian paramilitaries from the private security group Wagner, wearing fatigues and heavily armed, secured the area, though a little more discreetly than usual.

An umpteenth civil war has been tearing apart this one of the world's poorest countries since 2013, when a coalition of armed groups dominated by Muslims, the Séléka, overthrew President François Bozizé. The latter then organized and armed so-called anti-balaka militias, which are mostly Christian and animist, to try to regain power.

The conflict, extremely deadly for civilians, peaked in 2018 before declining in intensity, and Séléka and anti-balaka are accused by the UN of having perpetrated numerous war crimes and crimes against humanity.

In December 2020, Touadéra called on Moscow and Kigali to help counter an offensive by armed groups that then occupied two-thirds of the territory. Rwanda dispatched special forces and Russia sent hundreds of Wagner paramilitaries to reinforce hundreds of others present since 2018.

The rebels were quickly pushed back from most of their strongholds but continue to conduct sporadic guerrilla actions against the military and its Russian allies.

The UN and Western capitals accuse the Central African army and Wagner of committing crimes against civilians, as do the rebels, and Touadéra's government of paying paramilitaries and Russian companies with the country's mineral resources, especially gold and diamonds. 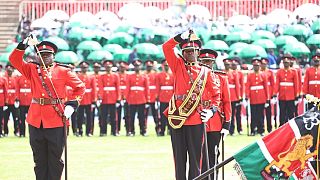