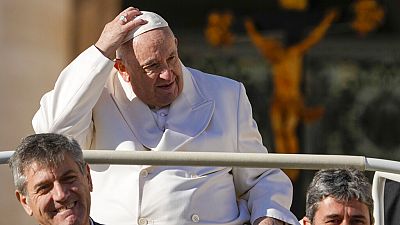 Pope Francis has rescheduled his delayed trip to Congo and South Sudan for Jan. 31-Feb. 5, cutting out a stop in Congo's conflict-ravaged east but fulfilling a years-long wish to accompany other Christian leaders to the young nation of South Sudan.

The Vatican on Thursday (December 1) published the itinerary of the trip, which had originally been scheduled for last July but was postponed because Francis was undergoing therapy for his strained knee ligaments.

The 85-year-old Francis is still using a wheelchair but has made other foreign trips in the meantime, suggesting that he can go through with even challenging itineraries.

The new itinerary roughly matches the original, with one significant exception: Initially the pope had planned to celebrate Mass in the eastern Congolese city of Goma en route to South Sudan. Now, Francis will meet in the Congolese capital, Kinshasa, with a delegation of faithful and "victims" from Goma.

Tens of thousands of Congolese have been displaced, with many heading toward Goma, amid renewed clashes between government soldiers and M23 rebels in Congo's mineral-rich east. A cease-fire to end the latest round of fighting was supposed to go into effect last week.

After the Congo leg of the trip Jan. 31-Feb. 2, Francis will be joined by the archbishop of Canterbury, Justin Welby, and the moderator of the General Assembly of the Church of Scotland, the Right Rev. Iain Greenshields, for a first-ever ecumenical peace trip by the leaders of the three Christian churches, to Juba, South Sudan, from Feb. 3-5.

There, the three will celebrate an ecumenical prayer service together, and meet with displaced South Sudanese.

The visit seeks to boost a 2018 agreement aimed at ending the civil war. It has been in the works for years, but has been repeatedly postponed because of the security situation on the ground, and then in July because of Francis' health.