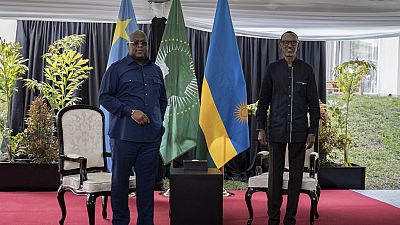 Fighting in eastern DRC between government forces and rebels from the M23, a former Tutsi rebellion, has heightened tensions with neighbouring Rwanda, which the DRC accuses of encouraging the militia. Kigali denies any involvement.

Talks between the two countries in Angola last week led to a ceasefire that appears to have held for several days.

In a state address on Wednesday (November 30), Kagame said "the whole world" blamed Rwanda for the crisis, but that it was Felix Tshisekedi who was seeking to profit from the violence ahead of the presidential election scheduled for 20 December 2023.

In the DRC, the presidential election is a one-round election, coupled with legislative elections as well as elections for provincial deputies and communal councillors.

"This problem can be solved if a country that is heading for elections next year does not try to create the conditions for an emergency situation so that the elections do not take place," Kagame said at a swearing-in ceremony for new cabinet members.

"If he is trying to find another way to postpone the next elections, then I would prefer that he uses other excuses, and not us," Kagame said.

The electoral commission said this month that continuing insecurity in parts of the country would pose a challenge to a "free, democratic and transparent" vote.

Under the ceasefire that came into effect on 25 November, M23 fighters must withdraw from "occupied areas" or an East African regional force would intervene.

The M23 is one of dozens of armed groups that have made eastern Congo one of the most violent regions in Africa.

Another round of talks with armed groups continued in Kenya on Wednesday, without the presence of the M23.

Uhuru Kenyatta, the former Kenyan president overseeing the talks, said foreign rebel groups operating on Congolese soil "should leave" or face DRC and East African troops. "They have already been warned: the DRC will not be a fighting centre for other countries," Uhuru Kenyatta said.