He urged rich nations to fund climate action in poorer countries during an address to United Kingdom's parliament.

Ramaphosa said there was "a responsibility of the more industrialised nations of the world to contribute substantial resources to low and medium income countries to fund their climate actions."

"This should not be seen as charity", he insisted. "It is compensation for the harm done and the harm yet to be done to people in developing economies as a consequence of the industrialisation that wealthy countries have had over many years."

Ramaphosa received a standing ovation from the audience who consisted of serving MPs as well as members of the, upper chamber, the Lords. His comments come days after the end of the UN climate conference COP 27 in Sharm el-Sheikh (Egypt).

"We are pleased that the final outcomes of COP-27 hold out the promise of concerted action to address climate change. It was Nelson Mandela who espoused the vision of a global community of nations that strives by all means available to improve the human condition", Ramaphosa said.

If the United Nations COP27 climate summit approved the creation of a special fund to cover the damages suffered by vulnerable nations affected by global warming, it did not commit to slash emissions and limit warming to below 1.5C. SOURCER /EDIT

The president of Africa's most industrialized nation also called for the UK to push for more "representative and more inclusive international bodies" such as the United Nations Security Council and global financial institutions.

Earlier he was welcomed during a ceremony by King Charles III and Camilla, Queen Consort and also met William and Kate, the Prince and Princess of Wales.

The visit was organized before the death of Queen Elizabeth II.

The last state visit by a South African leader was in 1996, when Nelson Mandela was honored two years after he became South Africa's first Black president. 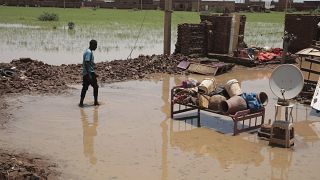