The approaching men's World Cup will be the first to feature female referees, with three women set to make history in Qatar while hoping that the focus remains on their job rather than their gender.

France's Stephanie Frappart, Rwanda's Salima Mukansanga and Japan's Yoshimi Yamashita were included in the list of 36 referees selected by FIFA, while three more women will head to Qatar as assistant referees.

The trio of referees, as well as assistants Neuza Back of Brazil, Mexico's Karen Diaz Medina and Kathryn Nesbitt of the United States, will go to Qatar having already established themselves as officials in the men's game.

Rwandese Mukasanga is overjoyed to take part in this competition: Not only proud, super proud and it's a privilege and an honor being part of the history, and then we are part of people playing that history. It's another level, it's something really... so excited", she said Friday (Nov. 18).

Frappart, one of the female referees, believes FIFA and the governing bodies are putting out a strong message by having women referees in this country.

The fact these women are breaking new ground in the men's game at a World Cup taking place in Qatar -- a country often criticised for its record on women's rights -- is hardly insignificant.

Putting the emphasis on the beauty of the game

Yamashita said that refereeing at the World Cup "is a big responsibility but I am happy to have it", adding that she "never imagined" being handed such an opportunity.

Indeed she only became a referee after being persuaded by a university friend, who she said "half dragged me" to take charge of a game for the first time.

Meanwhile Mukansanga, 34, was called up for the World Cup having become the first woman to take charge of a match at the men's Africa Cup of Nations in January this year.

The Rwandan once dreamt of becoming a professional basketball player but was already refereeing in the women's domestic league in her home country by the age of 20.

Nevertheless, none of these six pioneers want their gender to be a talking point, and nor do they seek the limelight.

"I am going to do everything I can to make sure that what is emphasised is the beauty of the football. I am not interested in power or control," Yamashita said in a recent interview with FIFA.com.

Frappart, who is appreciated in France for her diplomatic style as well as her firmness, insisted: "It is no longer about what gender you are. It is about your ability." 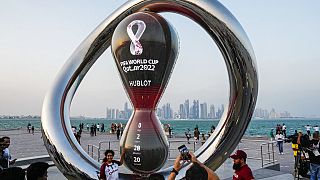