The second contingent of Kenyan troops deployed under the banner of a regional bloc arrived in the war-ravaged east of the DRC, Wednesday (Nov 16).

The soldiers flew into Goma from Nairobi and are part of over 900 Kenyan troops that will be sent to the Democratic Republic of Congo.

They will be joined by troops from other member states of the East African Community (EAC) to help the Congolese government battle rebels who now control key localities forcing thousands of Congolese to flee their homes.

The Congolese Deputy Chief of Staff for Operations hoped the presence of Kenyan soldiers will enable military gains.

"I hope that with your arrival many things will change", Chiko Tshitambwe Jerome said.

"I hope we will evolve in an offensive mission, to finally bring peace in our country the DRC with 2 priorities the M23 and this Rwandan aggression.

EAC Force Commander Major General Jeff Nyaga outlined two main goals during the press conference: "We are here to protect and defend the Goma International Airport, including the Force headquarters, as the other processes go on."

Other processes include the upcoming inter-Congolese dialogue under the EAC-led peace process.

Heads of state agreed to the East African Community regional force in June.

"War does not necessarily bring peace, you have to pursue diplomacy", Commander Nyaga pointed out.

"The second on that track and is very critical for you to note, is the issue of disarmament and demobilization. Not only targeting M23 (rebel forces) because we seem all focused to be on M23, we have over 120 armed groups in eastern DRC. And they have instigated a significant degree of insecurity. If these two tracks fail, then we will automatically transit to the third track, which is military action."

The M23 rebel group rose to prominence about a decade ago when its fighters seized control of Goma.

They later entered into a peace agreement with the government but re-emerged late last year saying the terms had not been met. 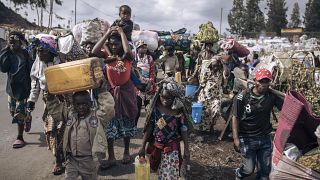