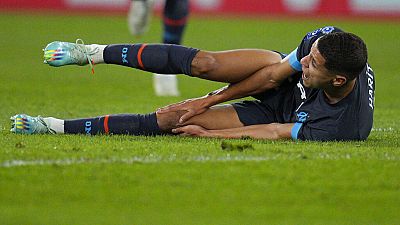 Olympique de Marseille's Moroccan striker Amine Harit was stretchered off during Sunday's Ligue 1 match against Monaco, "a very serious injury" according to his coach, which will prevent him from playing in the World Cup for which he was selected.

"It's a very serious injury," said coach Igor Tudor. "Harit has been taken to hospital for tests, his teammates and Tudor said.

"I'm very sad," said team-mate Matteo Guendouzi. "It's very difficult, we know what's behind it, the dream for him to play again, since he played the one in 2018," added the midfielder retained with the Blues. "He's an exceptional boy in terms of his mentality and he's making a very good start to the season, it hurts the heart, all the same."

"We are all behind him. We hope it won't be too serious. We tried to protect him. He seemed sad and worried. We are waiting. I am disgusted. It was hard to get back into the game," said Valentin Rongier.

The midfielder appeared to injure his knee in a duel with Monaco defender Axel Disasi (58th).

"I take the ball. And on the run-up, I feel contact. At the time, I can't see anything. I've got the impression of a crutch on my thigh," said Disasi after the match.

He was writhing in pain and remained on the pitch. His teammates, such as Matteo Guendouzi, waved their arms to call the medical staff.

The OM medical staff worked over Harit as the players, both Marseille and Monaco, looked on in concern.

Amine Harit was included in the 26-man squad selected by Moroccan coach Oualid Regragui for the World Cup in Qatar (20 November-18 December).