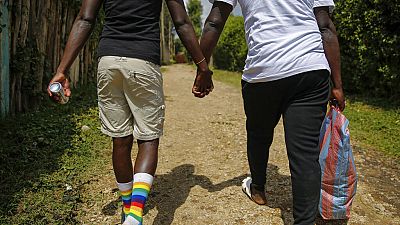 When Muna and Mary moved to Anambra, in southeastern Nigeria, they thought they were starting a new life. But the dream turned into a nightmare for the trans man and his girlfriend.

Threats of rape and insults from neighbours left them with no choice but to leave.

"It destroyed me. We didn't know where to go. I felt like killing myself," says Muna, 26, with tears in her eyes.

Today, the couple lives in a house that looks like any other, hidden away in a gated community in a deprived suburb of Lagos.

It is in fact one of the few refuges for LGBT+ people - they can be counted on the fingers of one hand - in Nigeria's vibrant economic capital. A rare haven of peace that welcomes eight gay, lesbian, bisexual or trans men and women for three to six months free of charge.

They have been rejected by their families, living mainly off the streets, but at least they don't have to pay rent as Nigeria, Africa's largest economy, faces a severe economic crisis three months before the presidential election.

"This place means a lot. We've come back from a very dark phase. Here you feel loved and safe, away from danger," Muna whispers, sitting on a sofa in the living room where daylight barely filters through the curtains.

In 2014, Africa's most populous country - a very religious one - passed a law against "same-sex marriage". Since then, homosexuality is punishable by 10 to 14 years in prison. In practice, this law is rarely enforced but it has legitimised widespread intimidation and violence against the LGBT+ community.

Even the police are frequently accused of extortion and humiliation.

As in much of Africa, homosexuality is often seen as imported from the West and contrary to local 'values'. But in Nigeria, homophobia is at its worst.

The Nigerian NGO La Crème de la Crème, which campaigns for the rights of transgender people, provides the three-room shelter at its own expense.

Next to Muna, in front of the open window, Mary, 25, laughs yellow at the idea that her mother often asks God "what she did to deserve a lesbian daughter".

"Almost everyone is homophobic. It's funny, this country is full of LGBT+ people but we have to stay hidden in the wardrobe. And if one of us is caught..."

In the shelter, distrust and silence reign. Everyone tells their story in a low voice, for fear of being overheard. The coordinator, Richard, 26, admits that "nobody talks to each other".

"But we shouldn't blame them, we don't know what they have been through. We're doing our best to ensure that they're at peace here," he says.

One word explains this climate of mistrust and is a source of fear in the Nigerian LGBT+ community: "Kito". It refers to the numerous photos, videos and stories of humiliation - or worse - of gay Nigerians posted on social networks.

This common practice, which mainly targets gay men, consists of creating a fake account on a gay dating application, mainly Grindr, and "tricking" a "target" by inviting him somewhere.

Once there, the victim is filmed, beaten, humiliated, insulted, sometimes raped and killed. They also have to pay large sums of money if they want to stay alive.

Diego, 29, says he is "lucky" when he hears these stories. The young man in the blue polo shirt and long fingernails says he takes every precaution, including waiting "months" or even "years" to invite someone over or to travel.

"You have to be invisible and really pay attention to the people around you," he says.

There are, however, a few ephemeral pockets of freedom in Lagos, the tumultuous megalopolis of 20 million people, especially at parties and in the bustling art scene. Shrubs that hide a forest of dangers.

The country of over 215 million people is preparing to elect a successor to President Muhammadu Buhari in February. During the presidential campaign, no candidate mentioned sexual and gender minorities. 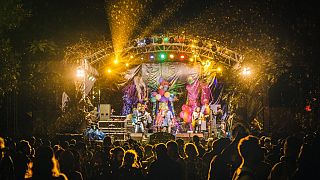