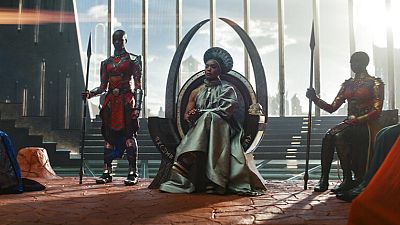 "Black Panther: Wakanda Forever," the sequel to the Afro-futuristic Marvel film that bombed in 2018, has largely dominated the North American box office in its first weekend in theatres, according to figures Sunday from trade firm Exhibitor Relations.

With an estimated $180 million in receipts between Friday and Sunday in the United States and Canada, the Marvel film ranks as the 13th highest-grossing film in history, according to Box-Office Mojo. Internationally, the film took in another $150 million.

"It's a sensational release," said David Gross of Franchise Entertainment Research, "especially for a mid-November release.

Audiences and exhibitors, who have been in a box-office slump since the end of the summer season and the reduction in the number of big-budget blockbusters, were eagerly awaiting "Wakanda Forever".

The film got off to a strong start, slightly stronger than the first film, with $84 million on opening day, including $28 million for Thursday previews.

"Some people may have been hoping for $200 million like the first film, but it's solid," said Paul Dergarabedian, senior media analyst at Comscore. "This is the type of movie that theaters really need to attract audiences."

"Wakanda Forever" pays a heartfelt tribute to Chadwick Boseman, the star of the original "Black Panther," who died in 2020 of colon cancer at age 43.

The actor makes appearances in flashbacks as T'Challa, the ruler of the fictional African kingdom of Wakanda.

After T'Challa's death, Wakanda finds itself at odds with world powers, including an undersea kingdom, and struggling to maintain its autonomy.

The 2018 "Black Panther", the first blockbuster starring a black superhero, became a cultural phenomenon and earned more than 1.3 billion dollars in revenue, collecting an Oscar nomination for Best Picture along the way.