Heads turn and jaws drop when she walks down a Cape Town street. She was born and raised in the port city and is a familiar face here.

It is her leading role as a criminal profiler in the crime series 'Reyka' that earned her the latest nomination. The International Emmy Awards honours TV shows made outside the USA.

"It's really exciting to be able to just express myself and act as an actress", she says beaming.

"I think most actors want to work locally, and also have the opportunity to work abroad. So I'm really very lucky that I'm able to do that. And I don't know I just want to do as many projects as I possibly can. "

The actress who's up for Best Performance got her first movie role in an Italian production at the age of 12. Her breakthrough came with 'Isidingo', a popular dinnertime South African soap and she remains attached to the South African series industry.

"I think I'm a proud South African. You know, I love the way that South African film and TV is made here. We've got a very authentic and a very gritty way of making TV and film. But then also there's a side of me that would like to see what it's like you know, abroad. I think every single actor or anybody in, in a field where you want to reach the highest level, you want to be able to work worldwide. "

Engelbrecht has already had a taste of Hollywood. She starred in TV series 'The Flash' and sci-fi drama 'Raised by Wolves' by Ridley Scott.

Getting to show the real South Africa

'Reyka', the series in which she investigates a series of murders in the sugar cane fields of the KwaZulu-Natal province was nominated for Best Drama Series.

"It's also an opportunity for people to see what South Africa is what South Africa is about to understand our cadence and who we are as a people and I think the reason why the international Emmys , I think for me so amazing is because it now makes people interested in a different side of what's happening around the world and also just opens people's eyes that that you know, the TV and film is being made on you know, other sides of the world."

Since her nomination she has received many scripts, and would like to have a go at comedy.

Whatever the result, Engelbrecht hopes her career will help motivate other young South Africans chase their dreams.

Winners of the accolade will be announced at a ceremony in New York on November 21. 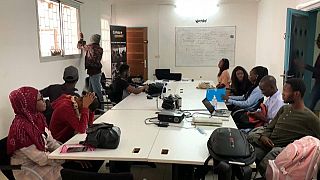