621 people, including 83 minors, have been arrested in Chad since the violently repressed opposition protests that left some 50 people dead on October 20, the public prosecutor in N'Djamena announced Friday.

"Out of the 628 people interviewed, they found minors, 83 in all, including one person, a child under the age of 12. The jurisprudence in our country says that a child under 12 years old is not responsible for anything," Justice minister Mahamat Ahmat Alhabo said.

Around 401 people have appeared in court and the other 220 before an instructing magistrate, according the N'Djamena prosecutor Moussa Wade Djibrine.

This is the first time that the authorities have publicly admitted the figure of more than 600 arrests mentioned by several local and international NGOs after these demonstrations against the extension of two years in power of General Mahamat Idriss Déby Itno.

Local and international NGOs, have been saying for three weeks that dozens, even hundreds of people were killed in several towns on Thursday, October 20 (i.e. the day of the demonstration), and then afterwards in "extrajudicial executions".

However, the government has so far only acknowledged only "fifty" deaths by bullets and more than 300 injured, including "ten killed" among the forces of order.

President Déby, who was extended in office for two years at the beginning of October by a national reconciliation forum boycotted by a large part of the opposition and major rebel groups, has always claimed that the 20 October demonstrators were planning an "insurrection" to overthrow the government.

38-year-old Mahamat Idriss Déby Itno was proclaimed head of state by the military 18 months ago following the death of his father, Idriss Déby Itno, who was killed by rebels on his way to the front line after 30 years of ruling Chad with an iron fist.

The protests organized by opposition parties to mark the date when the ruling military had initially promised to hand over power had been banned. Howerver thousands of demonstration marched in Chad's main cities to demand a return to civilian rule and condem what some viewed as "France's interference" in the country's internal affairs.

Since the "events" of 20 October, "621 people have been arrested by the security forces and transferred" to the high-security prison of "Koro Toro", in a high security prison in the desert some 600 kilometres (360 miles) from the capital.

And "401 people have been referred to a court under the procedure of flagrante delicto, 220 others to an investigating judge" for investigation, the magistrate added.

Of the total, 83 were referred "to juvenile judges", he said. The flagrant offences "will be judged as soon as possible", concluded Mr Wade Djibrine, who gave no other details and answered no questions. 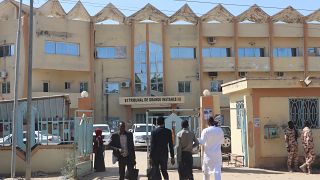 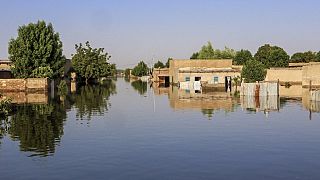