Jane Ruth Aceng toured the new treatment center, which was built by the charity Doctors Without Borders, alongside U.S Ambassador to Uganda Natali Brown and other health agencies officials.

According to health officials, the 42 Bed facility is designed to help patients recover quickly and also reduce the stress of isolation.

"With this 42 bed facility... relatives, friends can come and visit the patients,"Aceng said.

"There are high-risk zones and they are what we call green Zones, where the family members can come and interact with the patients with a two-metre distance in between," she added.

A recent explosion of Ebola virus cases has been reported in the Ugandan rural community Kassanda.

Officials said it began when defiant residents exhumed a body at night, undoing the work of a safe burial team in order to give the deceased man a proper Islamic funeral.

Within days, at least 23 of the mourners had contracted Ebola and three were dead, prompting Uganda's health minister to say she hoped the members of the farming community in the district of Kassanda had learnt their lesson.

Ebola has infected 130 people and killed 43 in Uganda since September 20th, when the outbreak was confirmed in Mubende days after local officials first noted a “strange illness."

Official figures don’t include those who died with probable Ebola before the outbreak was confirmed. 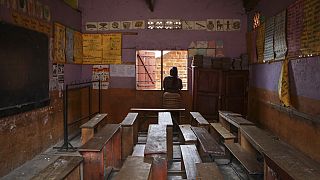