Burkina Faso's new military leader on Wednesday visited Mali for his first foreign trip since taking power, holding what his Malian counterpart hailed as "fruitful" exchanges on peace and security.

Captain Ibrahim Traore, who seized power in Burkina Faso in a September 30 coup, flew to the Malian capital Bamako for what Mali's foreign ministry said would be a roughly three-hour "friendship and working visit".

"With a view to improving the security of our respective populations, (Traore) and I had fruitful exchanges this afternoon on the major challenges that impact the peace and stability of our states," Mali's Colonel Assimi Goita, who came to power in an August 2020 putsch, said on Twitter late Wednesday.

He greeted 34-year-old Traore in the afternoon as he dismebarked from the plane at the airport in the capital Bamako.

The two men then headed to a VIP airport lounge for private talks before continuing on to the presidency for further meetings with their respective delegations.

A Burkinabe official had earlier said the main issue discussed would be "the fight against terrorism", referring to the two countries' bloody struggle against jihadists.

The two Sahel states rank among the poorest and most volatile nations in the world.

Both leaders came to power at the head of army officers angered by failures to roll back Islamists linked to Al-Qaeda and the Islamic State group.

Along with neighbouring Niger, the two countries have suffered thousands of fatalities and more than two million people have fled their homes.

Under Goita, Mali began to weave closer ties with the Kremlin, acquiring aircraft to strengthen its beleaguered armed forces and bringing in Russian "trainers", described by Western countries as Wagner mercenaries.

As this relationship intensified, ties with Paris, Mali's traditional ally, deteriorated and France became a target of vilification.

Paris this year pulled out the last troops it had deployed in Mali as part of its Barkhane anti-jihadist force in the Sahel.

The latest coup in Burkina has been marked by anti-French protests in which some demonstrators have waved Russian flags and demanded the departure of a contingent of 400 French special forces.

On Sunday, Burkina Faso's new prime minister hinted that his country may look at stronger connections with Russia, in the light of "the new deal" in security. 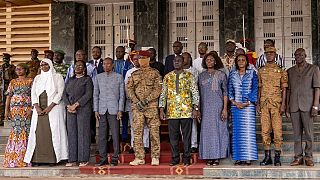