Senegal's renowned Pink lake may be in danger.

At the height of the rainy season in August, water cascaded into the lake, nearly tripling its usual depth. The influx washed away some 7,000 tonnes of salt that had been harvested.

The president of the Lac Rose's salt workers' cooperative estimates the losses at nearly a quarter of a million dollars.

Since the floods, the three thousand families earning a living extracting bucketfuls of salt, are living a nightmare.

"It's been two months since no one has been able to dive into the lake to work because there is a risk of drowning. Yet, the salt is at the bottom of the lake. Nobody can dive to harvest it", Maguette Ndiour laments.

When wandering around the stream of rainwater and flood water that pour into the lake, Ibrahima Mbaye, the president of NGO Save the Pink Lake, notices changes.

"If they are fish now, it means the water is not salty enough", he says.

The activists who also manages a hotel fears that floods will endanger tourism in addition to hurting the salt industry.

"With this much water, we can't have salt in the lake. So it might take up to 2 or 3 years find the salt again. And the salt plays a very important role for the concentration and the pink colour. So if there is no more salt, we cannot have the pink colour anymore."

The National Agency for Civil Aviation and Meteorology said the exceptional nature of this year’s rainy season is consistent with the finding of the latest report by UN's expert panel on climate change.

In this village further inland, the floods have caused misery to owners of lakefront stores. Some like Maimouna Fedior have had their shops submerged. Others lost much of paintings, masks, wooden knick-knacks and other souvenirs they sold to tourists.

"It's very difficult for us. Because we work here to feed the children", the mother of four adds.

Environment Minister Alioune Ndoye visited the area in early October and spoke with salt miners and those in the tourism industry.

Ativist Ibrahima Mbaye claimed the water had been pumped into the lake from the suburbs of Dakar, fueling concern that it carried toxic residues.

Mamadou Alpha Sidibe, director of flood prevention and management at the ministry of water, denied that the water had been pumped.

No pipelines or drains had been installed and ditches that brought the water into the lake from the surrounding areas had been formed naturally, he said.

The Environment ministry has collected water samples for a quality analysis, the results of which have not yet been released. 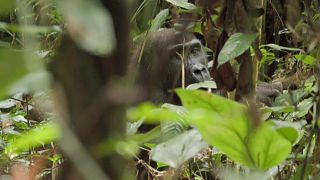