A Living Culture was the theme for this year’s Culture Summit in Abu Dhabi. Global policymakers and leaders in art, heritage, museums, and technology gathered to examine the ways in which culture can transform societies and communities. Organised by the Department of Culture and Tourism Abu Dhabi, more than 180 cultural leaders from around the world came to the UAE capital to speak about urgent global issues.

The role of culture in making resilient and shared societies was discussed by three former Heads of State, Dalia Grybauskaitė, President of Lithuania (2009-2019); Ivo Josipović, President of Croatia (2010-2015) and Joyce Banda, President of Malawi (2012-2014) in conversation with Zaki Nusseibeh, the Cultural Adviser to the UAE President.

Joyce Banda, the former first female President of Malawi from 2012 – 2014 asked: “What is it that we must do to use culture to heal our nations, our societies and [how it can] bring us together as a global family?”

Some of the notable themes of the summit included the idea of looking back to make sense of the present, empowering new voices, social responsibility, and diversity.

Reem Ghaith Fadda, the Director of the Cultural Foundation and Abu Dhabi Cultural Sites at the Department of Culture and Tourism Abu Dhabi told Euronews, “Culture is everywhere. We want that interconnectedness of culture. We want to be able to make sure that the underprivileged have an equal say in culture. We want to make sure that culture is also stable, especially during crises, be it war or pandemics or so forth, that it's safeguarded. But we also want it to be able to transform society in a better and progressive way.”

A diverse range of topics was discussed throughout interactive workshops and panel discussions such as 'Afghanistan through a Culture Lens', 'East Africa Design Future' and 'Disability and Difference as a Creative Generator'. The creative philosophy of the world’s first humanoid artist Ai-Da gave an insight into the intersection of art and technology.

Tim Marlow, the Chief Executive and Director of the Design Museum London interviewed Ai-Da during the summit and told Euronews, “She's so symptomatic of so many aspects of different cultures. She’s not just Western pioneering technology. There are other parts of the world where the impact of the knock-on effects of what AI and that kind of technology will have is profound. It's a brilliant microcosm of something that really should and needs to be owned by all of us.”

Tim explained AI is both an opportunity and a threat for all of us. He added, “ I suppose we have an ethical responsibility to try and work out collectively where this goes.”

Ernesto Ottone Ramirez, the Assistant Director General for Culture for UNESCO revealed climate change is affecting everything we know and in 10 years you're going to have 20 countries that will disappear completely off of the map. He told Euronews, “Culture, arts and the protection of heritage is a powerful instrument for peacebuilding. That's what should be important, that culture is used in all the systems, [the] education system, health system as leverage for building back better.”

In-depth film discussions ranged from film tourism and the effect of creative production to taking Bollywood global and the making of a blockbuster film franchise Dune.

Hans Fraikin the Film and TV Commissioner of the Abu Dhabi Film Commission told Euronews, “ We don't always put film and TV, the screen entertainment medium, into the category of cultural, creative industries. And it's important to explain how important film and TV are not only as a form of cultural expression but as a platform to distribute."

He explained, “The Abu Dhabi Film Commission plays an important role in the cultural expression of Abu Dhabi culture, particularly when we attract a project, whether it's a feature film, a TV series, even a music video that is set in Abu Dhabi.”

Hans added that film tourism is an economic benefit. He said, “When you have a film like Mission Impossible that's seen by a billion people around the world and that is set in Abu Dhabi, that has a spin-off effect, a positive economic effect on film tourism.”

Now that the pressures of COVID have eased, conversations from leading international creatives across the three-day summit have been essential in shining a light on fortifying culture for the future, and the collective social promise the future holds. 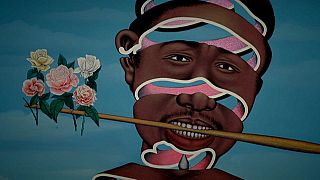