Human rights organizations demonstrated in Rome on Wednesday against the renewal of an agreement between Italy and Libya to prevent migrants and refugees from reaching the European coasts.

The demonstrators claim human rights are blatantly violated in Libya where migrants and refugees trying to cross the Mediterranean Sea.

The Memorandum of Understanding (MoU) on development, cooperation, illegal immigration, human trafficking, fuel smuggling and reinforcement of border security was signed between then Italian Prime Minister Gentiloni and Fayez al-Serraj, Head of the UN-backed Libyan Government of National Accord in February 2017.

According to the agreement, Italy was providing the Libyan coast guard with vessels and training to help them to tackle human trafficking and illegal immigration.

Part of the MoU also deals with the creation and support of centers in northern African countries, mainly Libya, to host migrants who are caught trying to illegally cross into Europe.

But NGOs say serious human rights abuses take place at the detention centers, and are calling for the MoU to be revoked immediately.

Unless the Italian government revokes it, the agreement will be automatically renewed for three more years. 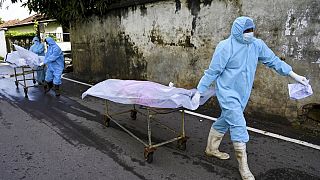