The SPLM's Secretary for Political Affairs, Mobilization, and Organization Kuol Atem is the latest to respond to the dismissal.

Machar along with Pagan Amum, formerly senior members of the party, were dismissed after both established breakaway parties-- the SPLM-IO and the Real-SPLM, respectively.

"You cannot be a member here in SPLM and also you are a chairman of another party called SPLM-IO, it is impossible," says Atem.

"What brought us up to this moment is that Riek Machar and Pagan Amum, were holding very senior positions that they were elected. That is why the political bureau could not dismiss them. Now Political Bureau has come out with a resolution, a recommendation, to National Liberation Council, to dismiss them." Atem stressed.

The world's youngest nation has lurched from crisis to crisis since it proclaimed independence from Sudan in July 2011, and is held together by a fragile unity government between historic foes President Salva Kiir and Machar.

But Machar on Monday rejected the decision to strip both him and SPLM secretary general Pagan Amum of party membership, as well as leadership roles.

"No faction can dismiss any member of the other factions from SPLM," Machar's wing of the party, the Sudan People's Liberation Movement in Opposition (SPLM/A-IO), said in a statement.

Kiir and Machar were on the same side in the push for independence from Khartoum but ethnic and political rivalries drove them apart.

The SPLM was founded as the political wing of the Sudan People's Liberation Army (SPLA), which led the fight for South Sudan's independence.

But it splintered into different factions after the civil war erupted in December 2013.

The tension between Kiir and Machar has often descended into deadly violence despite numerous pledges to silence their guns.

In April, they agreed on the creation of a unified armed forces command, one of several deadlocked issues holding up the implementation of the 2018 pact to end the country's five-year conflict.

Former rebels from the rival camps were integrated into the country's army in August, ending years of deadlock between the two men and renewing hope of lasting peace.

The ceremony came weeks after the country's leaders -- appointed to run a transitional government -- announced that they would remain in power two years beyond an agreed deadline, sparking international concern.

The transition period was meant to conclude with elections in December this year, but the government has so far failed to meet core provisions of the 2018 deal, including drafting a constitution.

One of the poorest nations on the planet despite large oil reserves, South Sudan has spent almost half of its life as a nation at war.

Almost 400,000 people died in the civil war before Kiir and Machar signed a peace deal in 2018 and formed a unity government.

Since then, the country has battled flooding, hunger, violence, and political bickering as the promises of the peace agreement have failed to materialise.

The United Nations has repeatedly criticised South Sudan's leadership for its role in stoking violence, cracking down on political freedoms, and plundering public coffers. 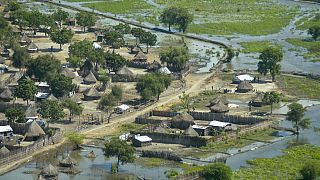