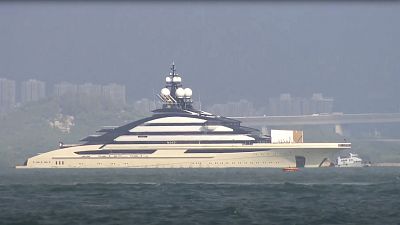 Cape Town port is ideally suited to host a $500 million superyacht linked to sanctioned Russian billionaire Alexey Mordashov, a South African official said Wednesday after the country announced its intention to let the vessel dock there despite a bid by the city's mayor to block its entry.

The South African government made the announcement Tuesday amid claims that steel and mining magnate Alexey Mordashov is seeking a new harbor to shield the superyacht from seizure.

The official said Cape Town was perfect for the Nord because it has the technical means to maintain luxury yachts that many other harbors don't.

"If you're parking a $500-million asset, you need it looked after properly," the official told the Associated Press on condition of anonymity because he's not permitted to speak publicly on the issue.

Vincent Magwenya, the spokesman for South African President Cyril Ramaphosa, said Tuesday that there was "no reason" for South Africa to deny the Nord entry as Mordashov wasn't the subject of United Nations sanctions, only sanctions imposed unilaterally by the United States and the European Union.

The Nord, which left Hong Kong on a journey across the Indian Ocean to South Africa last week, would be allowed to dock in Cape Town harbor as long as those on board "abide by our immigration laws," Magwenya said.

Mordashov is not believed to be on board the yacht.

"Currently there are no U.N.-imposed sanctions on the particular individual and therefore South Africa has no legal obligation to abide by the sanctions that the U.S. and the EU have decided to impose within specific jurisdictions," Magwenya told reporters in the South African capital, Pretoria.

Mordashov is thought to have close ties to Russian President Vladimir Putin and was sanctioned by the U.S. and the EU because of the war in Ukraine. He is the main shareholder and chairman of Severstal, Russia's largest steel and mining company, and one of Russia's richest men, with a net worth of over $20 billion, according to Bloomberg's Billionaire's Index.

Cape Town mayor Geordin Hill-Lewis said Mordashov has benefited financially from the war in Ukraine and is "an accomplice to the unconscionable crimes committed against Ukrainian civilians." Hill-Lewis had asked the South African government to block the Nord from docking, eliciting the response from President Ramaphosa's spokesman.

South Africa has adopted a neutral stance on the war in Ukraine, frustrating Western partners who had hoped that Africa's most developed economy would also condemn Russia's invasion and act as a leading voice for the continent. South Africa abstained from a U.N. vote condemning Russia's actions and called, instead, for dialogue and diplomacy.

Hill-Lewis is a member of South Africa's main opposition party, which has been fiercely critical of the neutral stance taken by Ramaphosa's government.

"It must be said that, so far, our country's foreign policy conduct in relation to Russia's illegal, imperialist war has been nothing less than shameful," Hill-Lewis said.

The Nord flies a Russian flag, is 141.6 meters (465 feet) long, and has two helipads, a swimming pool, and 20 cabins. It sailed out of Hong Kong after the U.S. accused that city of operating as a safe haven for sanctioned persons. It is expected to arrive in Cape Town on Nov. 9, according to the Marine Traffic shipping website. 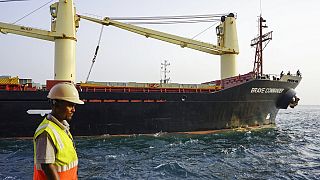 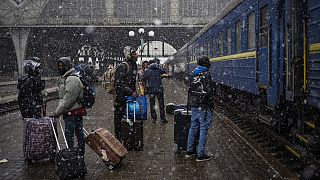