**The Dakar International Forum on Peace and Security in Africa opened its doors in the Senegalese capital on Monday. **

For two days delegates and participants in the conference will focus on the continent's security challenges. The event is attended by ministers, the military, and representatives of international organizations.

"Africa must make an effort on its own security. There must be African solidarity first before calling for foreign solidarity. Then we have to focus on the training of people, Africa's primary capital. We must take care of the youth", said general Mohammed Znagui Ould Sid'Ahmed Ely, G5 Sahel defense and security expert.

Senegalese President Macky Sall, the current Chairperson of the African Union, spoke at the opening ceremony of the event, which he hopes will support Africa's bid for a permanent seat on the G20 and the UN Security Council.

"For us, it is important that Africa positions itself, first of all in terms of multilateralism, Africa needs to be like a giant, and to be considered at the table of the Security Council and to have the right of veto if necessary", affirmed Bineta Diop is the African Union's special envoy for Women, Peace, and Security.

"For two days, participants will attend workshops to highlight how foreign shocks from outside of the continent impact the security situation of African countries. The aim of these meetings is to seek solutions that will enable the continent to no longer rely on external support in terms of armed forces or food aid, for example, and to assert its sovereignty". 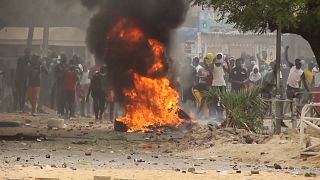