A trade union close to the main Moroccan Islamist party on Sunday mobilised several hundred supporters in the capital to protest against the high cost of living.

The rally, outside parliament and witnessed by AFP journalists, came after several protests already this week in Rabat and other Moroccan cities.

"Our Union is organising this demonstration today to address public opinion, the government, the parliament, the political, economic and social parties, and the living forces."

"Enough (of suffocating the people) with the purchasing power of the citizens, enough of the high prices of fuel, raw materials and foodstuffs," said Mohamed Zouiten, a trade unionist.

"Let's finish (stifling) the purchasing power and let's finish the non-increase of salaries, the high cost of daily life, the high fuel prices at all levels.

"All this makes the citizens suffer, and we have to make our voices heard so that this injustice is lifted from them and so that the government takes action and keeps the promises it made during the last electoral campaigns," said Fatema Belahcen, a trade unionist.

It was organised by the country's main trade union, the UNTM, which is close to the Justice and Development Party (PJD).

The PJD was routed in legislative elections in September 2021, when the liberal RNI party -- led by Prime Minister Aziz Akhannouch -- performed well.

"Prices are rising and the government is asleep!" protesters chanted, before dispersing peacefully after about 90 minutes.

Consumer price inflation was 8.3 percent year-on-year in September, due in large part to surging food prices, which were up 14.7 percent.

Fuel prices have also risen sharply, making Akhannouch a particular target of ire, given that he is a billionaire local oil distribution baron. 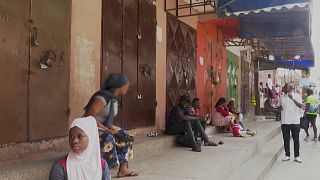