Chad's military ruler Mahamat Idriss Deby on Friday visited a hospital and a protest-hit district of N'Djamena, his office said, after a day of unprecedented violence that left around 50 people dead in the capital and elsewhere.

Tensions eased on Friday after Chad's ruling junta announced an overnight curfew on Thursday, following fatal clashes eariler in the day between police and demonstrators protesting against the military's grip on power.

The violence came on the heels of a national forum organised by Deby that extended his military government's grip on power beyond Thursday's deadline.

Deby, a 38-year-old five-star general, has been in power since his father -- longtime military president Idriss Deby Itno -- was killed in an operation against rebels in April 2021. He took no journalists with him on his city tour on Friday.

Escorted by a dozen vehicles, Mahamat Deby visited the capital's southern seventh district, where there were violent clashes on Thursday, according to photos posted on the presidential palace's Facebook page.

Some photos showed him at the hospital bedside of people hurt in the clashes.

Prime Minister Saleh Kebzabo put the official toll from the violence at around 50 dead and more than 300 injured. He said most fatalities had occurred in N'Djamena and the cities of Moundou and Koumra.

Kebzabo also announced the suspension of "all public activity" by major opposition groups, including the Transformers party and civil society coalition Wakit Tamma.

In southern districts of the capital, where most of the clashes took place, there was relative calm on Friday morning, although debris from burnt tyres and the remains of makeshift street barricades littered the streets.

Law enforcement officers, some of them hooded, were seen sitting in vehicles to deter further protests.

Deby's junta had originally declared it would restore civilian rule after 18 months in power and he initially promised not to take part in elections that would follow.

But as the 18-month deadline neared, the nationwide forum staged by Deby reset the clock. On October 1, it approved a new 24-month timeframe for holding elections.

It named Deby "transitional president" and declared he could be a candidate in the poll. 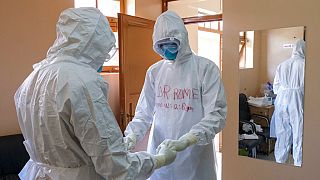