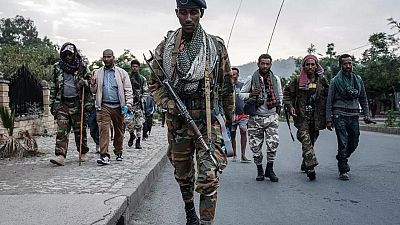 The rebel authorities in Ethiopia's Tigray region have confirmed their participation in talks scheduled for Monday in South Africa, under the aegis of the African Union (AU), aimed at ending the two-year conflict in the north of the country.

"It is the first time that the Ethiopian federal government has taken the lead in the negotiations," said Kindeya Gebrehiwot, a spokesman for the two parties, in a message to AFP.

The Ethiopian federal government of Prime Minister Abiy Ahmed, which has been at war with the rebel authorities in Tigray since November 2020, announced on Thursday that it would take part in the talks, but neither the AU, which is based in Addis Ababa nor Pretoria has officially confirmed this yet.

Previous talks, convened in early October in South Africa by the AU, had fizzled out before they even began, amid organisational problems.

On Friday, the AU High Representative for the Horn of Africa, former Nigerian President Olusegun Obasanjo, who is leading the mediation efforts, briefed the pan-African organisation's Peace and Security Council (PSC) "on the peace process for Ethiopia".

This closed-door meeting of the PSC, the body in charge of conflicts and security issues within the pan-African organisation, was the first since the resumption of fighting on 24 August in northern Ethiopia, which had ended a five-month truce and the meagre hopes of talks that it had raised.

The content of Mr Obasanjo's address was not immediately disclosed.

The UN Security Council is also due to meet - also behind closed doors - on Friday to discuss the situation in Ethiopia, State Department spokesman Ned Price said in Washington.

Both meetings "demonstrate the international community's deep concern about the situation in northern Ethiopia," he added.

On Thursday, during the inauguration of a school in Addis Ababa, Mr. Abiy had assured that the war in northern Ethiopia would "end and peace will prevail".

"We are not going to continue fighting indefinitely," he said, without mentioning the upcoming talks in South Africa and while the Ethiopian army and its allies have recently stepped up their offensive in Tigray.

Ethiopian and Eritrean forces seized Shire, one of the main towns in Tigray, which had a population of around 100,000 before the war and was home to many people displaced by the conflict, after several days of bombing.

A humanitarian source who requested anonymity told AFP that intense fighting was taking place Friday in Selekelka, halfway between Shire and Aksum, citing "a push" by Ethiopian and Eritrean forces towards this other major town in Tigray which is home to a World Heritage site.

Price said US special envoy for the Horn of Africa Mike Hammer had been in Addis Ababa for several days "supporting AU efforts to launch the talks" which Washington "wants to see begin as soon as possible".