Young protesters clashed on Thursday with security forces in the Guinean capital Conakry after a banned group called for demonstrations against the country's ruling junta, an AFP reporter saw.

The National Front for the Defence of the Constitution (FNDC), which had called the protest, said five people had suffered gunshot wounds, one of whom was in critical condition.

There was no immediate corroboration of this toll from other sources.

The poor but mineral-rich West African state has been under military government since a September 2021 coup that ousted president Alpha Conde after more than 10 years in power.

An alliance of political parties, trade unions and civil groups, the FNDC spearheaded protests against Conde before his ouster.

It was officially dissolved in August by the junta-appointed government.

The coalition had called for peaceful demonstrations to take place in Conakry on Thursday, followed by nationwide protests on October 26.

It is pushing for a rapid return to civilian rule and the release of prisoners that it says have been detained for political reasons.

The unrest coincides with a visit to the country by the West African bloc ECOWAS, which on September 24 gave Guinea a month to propose a new timeframe, or else face a tightening of sanctions that it has imposed. 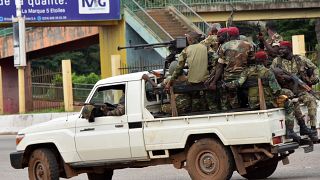