Nairobi is referred to as the 'Green City in the Sun' because of the lush parks surrounding the east African capital. Roam, a Kenyan-Swedish company now wants that epithet to also refer to the city’s environmentally friendly mobility.

It unveiled Wednesday an electric bus in a city where polluting exhaust fumes contribute to a thick smog.

"It’s the first electric mass transit bus in Kenya that we designed since last year and co-manufactured it with a global partner", Dennis Wakaba exclaimed.

"This represents a shift towards better public transport, where we can have people ride in comfort and enjoy the ride with a clear conscience because we’re talking about zero emissions", the Roam project coordinator said.

The brightly painted bus pulled out into the notorious morning traffic in the city of nearly five million, which lacks a state-run transport network.

Most commuter transport is privately operated in Nairobi and Roam said fares on the electric bus would rival those offered by its smoggier competitors.

If only one charging station exists in the metropolis of nearly five million, the team Roam was not deterred. They wanted to encourage green commuting in a city where smog-belching minivans are a far more familiar sight.

The 77-seat bus has a top speed of 70 kilometres per hour and a battery pack allows it to travel 360 kilometres before requiring a 2-hour recharge.

It was also designed to be accessible and inclusive for all.

"It can accommodate people in wheelchairs, the elderly… So we have priority seats inside this bus", Wakaba reveals.

"Nairobi has been seen as a leader of innovation, and we see Nairobi as a good starting point and as an innovation hub to deploy these buses", he adds.

Roam -- which also manufactures electric safari vehicles and motorbikes -- says it plans to roll out 100 electric buses over the next year.

They have also started the design process for a smaller bus to complement the 77-seater.

Eighty percent of Nairobi's commuters use matatus -- minivans that are poorly regulated and maintained, and known for frightening manoeuvres and trails of black smoke streaking behind battered chassis.

It is estimated that less than 500 of Kenya's 3.5 million cars are electric, despite the government making them cheaper than ever to purchase.

The transport sector accounts for 12 percent of Kenya's emissions footprint -- though that figure rises to 45 percent in Nairobi, according to government figures.

Earlier this year another electric mobility startup, BasiGo, unveiled a 25-seater bus with a 250-kilometre range for Nairobi's roads.

Kenya sources most of its energy from renewable resources and is seeking to cut CO2 emissions by 32 percent by 2030. 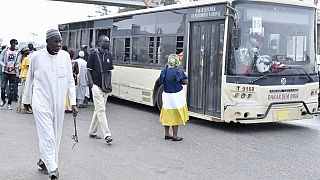