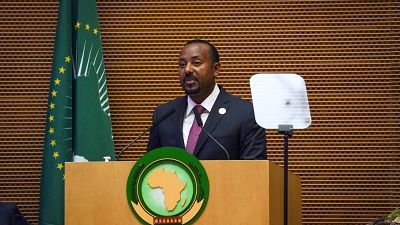 The African Union-led peace talks to end a two-year conflict in Ethiopia's northern Tigray region is expected to take place in South Africa on October 24.

Redwan Hussien, the national security advisor to the Ethiopian Prime Minister, Abiy Ahmed revealed the new date in a tweet on Thursday (October 20).

The AU Commission "has informed us that the peace talks are set for October 24 in South Africa. We have reconfirmed our commitment to participate," wrote Redwan Hussein, National Security Advisor to Prime Minister Abiy Ahmed.

The rebel authorities in the northern region of Tigray, which has been in armed conflict with the federal government since early November 2020, are yet to confirm their participation.

After a five-month truce that raised hopes of negotiations, large-scale fighting has resumed in northern Ethiopia since August 24.

Previous talks, convened in early October by the AU in South Africa, were eventually aborted, mainly due to organizational problems, according to diplomats.

The United Nations, the United States, the European Union (EU), and the AU have in recent days sounded the alarm over the intensification of fighting in Tigray, which has been caught in a pincer movement by federal Ethiopian troops and its allies, notably the army of Eritrea, a country bordering Tigray.