At Shamas Auto Parts, a spare part shop in Nairobi, Kenya, business is slow these days.

The impact of a strong US dollar is felt. It contributes to making other countries' imports more expensive and more local currency is needed to convert into dollars.

This is compounding financial distres at a time when the Kenyan shilling is down 6% this year.

"Sometimes you find that there is an increase of about 10-25% in the cost of a spare part within a period of maybe six to twelve months, which people are not expecting", Michael Gachie, purchasing manager with Shamas Auto Parts says.

"For us, right now we are in wholesale and retail of parts and you find that most of the customers are complaining a lot", the manager concludes.

According to the benchmark ICE U.S. Dollar Index, the dollar is up 18% this year against a basket of key currencies.

"We are continuing to lose. I used to take my children for holidays. They cannot enjoy those holidays anymore because of the weakening shilling. We don't have enough cash flows to put it about in the house", Albert Chege says.

the cost of fuel and imported spare parts is soaring so much that some people are choosing to ditch their cars and take public transportation.

To combat US inflation running at its fastest rate in 40 years, the Federal Reserve has raised its benchmark short-term interest rate five times this year with worldwide consequences.

The currency of East Africa's largest economy has been sliding to record lows against the dollar. As of October 18, 1 U.S dollar sold 121.1706 Shillings when on August 2nd, it sold 119.0118 Shillings.

Many other currencies are also doing bad. The Indian rupee has dropped more than 9% this year against the dollar, the Egyptian pound 20%, the Turkish lira an astounding 28%.

Ordinarily, countries could get some benefit from falling currencies because it makes their products cheaper and more competitive overseas.

But at the moment, any gain from higher exports is muted because economic growth is sputtering almost everywhere. 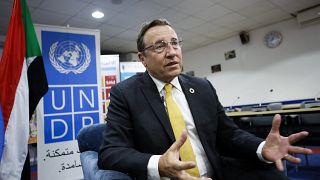