Angolan President Joao Lourenço delivered his first speech before the National Assembly since his re-election admitting to devoting all his strength and attention to the search for the best conditions for the population.

The speech comes a few weeks after his re-election for his second term.

"I will devote all my strength and attention to finding the best conditions for the people. The main problems of the country, as we all know in the last five years, our country has experienced enormous turbulence, including two crises that have created difficulties in the lives of all families, businesses and state institutions," said President Joao Lourenço.

"The indicators of the country's debt finances show that this year we will also have a positive balance with the economic reforms we have carried out, which was also possible in the trajectory of the increase in public debt," said President Joao Lourenço.

The return of the ruling formerly Marxist Popular Movement for the Liberation of Angola (MPLA) has been met by opposition. To some, the country needs to address pressing matters like education reforms and other infrastructure.

"It is a very important speech, long, compact, and full of perspectives that the country needs. The social space, education, health, road and maritime infrastructures, and the president compiled all this," said Don Afonso Nunes, a  pastor at Toicoiste church.

The formerly Marxist Popular Movement for the Liberation of Angola (MPLA) won a wafer-thin majority of 51.17%of the vote, handing President Joao Lourenco, the 68-year-old former general, the second term in power. 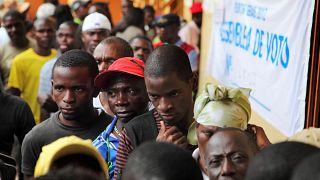