The United Nations Support Mission in Libya (UNSMIL) condemned on Sunday the "heinous murder of at least 15 migrants and asylum seekers" in the Libyan city of Sabratha (west), calling for "bringing the perpetrators to justice".

Fifteen bodies of migrants, some of them burned, were discovered on Friday on the coast of Sabratha (70 km from the capital Tripoli), an important departure point for thousands of people who seek each year to reach the Italian coast.

"Eleven charred bodies were found inside a moored boat and four other bodies with injuries were found outside," Manul said in a statement.

"Although the exact circumstances have yet to be determined, the killings are believed to have been the result of armed clashes between rival traffickers," said the UN, which urged Libyan authorities to "ensure a prompt, independent and transparent investigation to bring all perpetrators to justice.

This tragedy "is a stark reminder of the lack of protection faced by migrants and asylum seekers in Libya, as well as the widespread human rights violations perpetrated by powerful trafficking and criminal networks," the UN mission said.

According to local media, the migrants, mostly from sub-Saharan Africa, were killed Thursday by gunfire following a dispute between smugglers.

One of the groups of smugglers involved in the dispute then set fire to the boat on Friday, the same sources said.

The chaos that followed the fall of Muammar Gaddafi's regime in 2011 has made Libya a preferred route for tens of thousands of migrants from sub-Saharan Africa, Arab countries and South Asia, eager to reach Europe via Italy.

These migrants fall prey to traffickers when they do not die attempting the perilous crossing of the Mediterranean, and Libya is regularly criticized by NGOs for the mistreatment they receive.

Two governments supported by two rival camps in western and eastern Libya have been fighting for power since March.

Since the beginning of the year, 14,157 migrants have been intercepted and returned to Libya, according to a report by the International Organization for Migration (IOM) released on Monday. At least 216 people have died attempting to cross the Mediterranean and 724 are missing and presumed dead, according to the IOM. 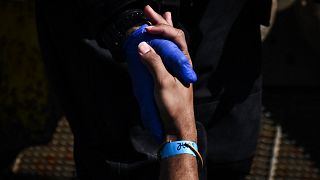