Chad's national forum, announced Saturday, that Mahamat Idriss Itno, who took over in April last year after his father demise would remain in power during the 2-year transition to elections.

At a ceremony boycotted by opposition members, leading armed rebel groups and civil society organisations, the "Transitional Military Council which had ruled the country for the past 18 months"was formally dissolved".

Despite calls urging the 38-old general not to extend the transition, and not to run for president in upcoming elections, the forum, among a raft of resolutions adopted under a revised transition charter, ratified Deby's right to vye for the presidency after the transition.

At the end of a ceremony lasting more than two hours, he expressed his "pride" at the forum meetings which he said have made it possible to "get out of the horror scenario".

Deby reiterated his commitment to releasing prisoners of war in exchange for a ceasefire and their participation in national dialogue.

The national talks which were wrapped in N'Djamena hab been launched 7 weeks earlier, on August 20. 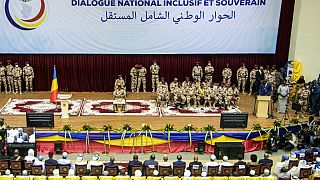