The two companies signed a $10-billion agreement earlier this year to develop Ugandan oilfields and ship crude through a 1,445-kilometre pipeline to Tanzania's Indian Ocean port of Tanga.

"In concrete terms, we are talking about a pipeline that will be over 1,400 kilometres long. And the promoters of the project boast that it will be the longest heated pipeline in the world. Why heated? It will be heated to 50 degrees because the oil in Uganda is too viscous and so they need to heat it to liquefy it and make it go through the pipeline easily. So it's a climate aberration", denounced Juliette Renaud, Campaigner for Friends of the Earth France.

The report said the pipeline would emit "up to 34 million tonnes of CO2 per year into the atmosphere -- far more than the combined greenhouse gas emissions of Uganda and Tanzania".

The NGO's accuse the oil companies of not putting in place adequate measures to safeguard communities and the environment.

"Lake Victoria, but also Lake Albert, where the oil drilling is going to take place, are sources of the Nile, so the impacts go far beyond Uganda and Tanzania. And unfortunately, what the experts who have studied Total's social and environmental impact studies tell us is that there will definitely be leaks. Moreover, Total has not yet put in place adequate measures to prevent these leaks", said the activist.

Reacting to the report, TotalEnergies said it would "do everything possible to make it an exemplary project in terms of transparency, shared prosperity, economic and social progress, sustainable development, environmental awareness and respect for human rights".

The European Parliament has already passed a resolution saying that more than 100,000 people were at risk of being displaced by the pipeline and called for them to be adequately compensated. 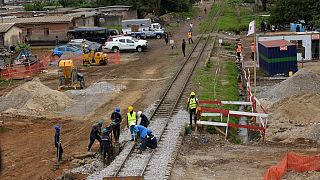