Local officials said dozens of civilians were killed this week in Talataye, a town located in north-eastern Mali. The locality which sits at croassroads of influence for rival terrorist groups was allegedly attacked by EIGS fighters who have ties with the Islamic State organization.

The exact death toll remains unknown. Indeed, only partial reports from different local sources shed light on the humanitarian tragedy occurring in the Sahelian town cut off from communication networks.

A local official said that 45 civilians had been killed, while an MSA fighter (standing for Tuareg-dominated Movement for the Salvation of Azawad) put the civilian death toll at 30. Both spoke to AFP on condition of anonymity and added that houses and the market had been torched.  An international humanitarian worker in the region said "several dozen" civilians had been killed.

Militants from the EIGS group, the al-Qaida-affiliated Group JNIM/GSIM and other armed organizations, including the Tuareg-dominated Movement for the Salvation of Azawad (MSA) have allegedly been fighting since Tuesday.

If confirmed, this could be the first time that Talataye suffers such a large-scale attack by the Islamic State in the Greater Sahara group.

Reports mentioned a Malian military air-offensive Wednesday. The army's head of communications was quoted by the AFP when speaking to local media Friday. Colonel Souleymane Dembélé slammed reports that Talataye was besieged by an ISIS affiliated group.

A women's association from the area, which is however based in Gao, pleaded on Friday to "come to the aid of the battered population". 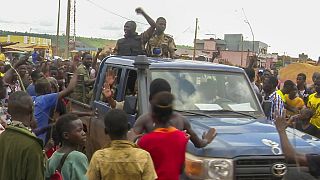