He arrives after a 25-year absence of a US envoy in Sudan due to diplomatic differences between the two countries.

"Ambassador John Godfrey arrived in Khartoum today to be the first US ambassador to Sudan in nearly 25 years," the embassy said in a written statement.

The statement further read, "envoy will “strengthen relations between the American and Sudanese peoples and support their aspirations for freedom, peace, justice, and democratic transition."

The U.S. closed its embassy in 1996 in Sudan after accusing it of hosting the late Al-Qaeda leader Osama Bin Laden.

Sudan has been in the grip of a wave of popular protests since October 25, 2021, demanding the return to power of civilians rejecting the measures taken by the chairman of the Sovereignty Council, army commander Abdelfattah al-Burhan, who decided on a series of emergency measures, considered as "a military coup" by those who are hostile to him.

Al-Burhan dismissed these accusations, stressing that these measures are aimed at restoring the process of the transitional phase and pledged to hand over power through elections or a national consensus.

The political, economic, and security situation has been steadily deteriorating since October 25, and protesters are continuing their revolutionary momentum to demand civilian rule.

In 1996, Washington decided to close its embassy in Khartoum, after putting Sudan on the blacklist of state sponsors of terrorism, because of the reception at the time by the regime of Omar al-Bashir of the founder of the Al Qaeda organization, Osama Bin Laden, who resided in the country from 1992 to 1996.

Washington reopened its embassy in 2002 but only sent chargés d'affaires. Since then, diplomatic representation has remained below the rank of ambassador.

In May 2020, Sudan appointed an ambassador to the United States, after more than two decades of absence, in an effort to normalize relations between the two countries.

A few months later, Washington removed Sudan from its list of state sponsors of terrorism. 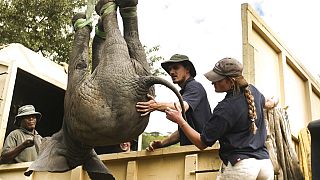