Hundreds of supporters of Guinea's opposition coalition staged a demonstration in front of EU buildings in Brussels on Sunday to protest its dissolution by Conakry's ruling junta.

The gathering, by the National Front for the Defence of the Constitution (FNDC), condemned the dissolution that was decreed August 6 and declared in defiance of the junta.

"The country or death!" organisers exhorted the crowd, which was watched over by a small contingent of Belgian police.

FNDC demonstrators said that, while they initially welcomed the junta's ruling National Committee of Reconciliation and Development (CNRD) and the end of Conde's reign, the junta had overstepped the line.

"We are going to try and tell authorities here (in the EU) that, no, it's not working in Guinea, no, there has been treason," said one Guinean civil society activist, Naby Laye Camara.

"They (the CNRD) haven't come for democracy, they have effectively come to confiscate power and even the liberty of people," he said.

Amnesty International has said the FNDC's dissolution amounted to a "serious attack" on the freedoms of association and peaceful assembly enshrined in Guinea's constitution.

The FNDC was behind banned demonstrations on July 28 and 29 in which five people were killed to denounce the junta's "unilateral management of the transition" to civilian rule.

The opposition coalition has called for further demonstrations to be held across Guinea on Wednesday.

If held, they would violate a junta order from May banning all demonstrations until campaigning in elections promised to be held at the end of a three-year transition period. 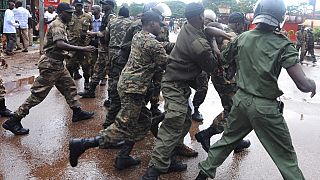