The last French soldiers of the Barkhane anti-jihadist force left Mali on Monday after nine years of presence, announced the French Ministry of the Armed Forces, against the backdrop of stormy relations between Paris and the ruling junta in Bamako.

"This day at 13:00 (from Paris, 11:00 GMT), the last detachment of the Barkhane force present on Malian soil has crossed the border between Mali and Niger," said the French headquarters in a statement.

After nine years of presence, Barkhane "has reorganized itself outside the country in less than six months," it added. "This major logistical military challenge has been met, in good order and security, as well as in total transparency and coordination with all partners."

"France remains committed in the Sahel," the French presidency stressed in another statement, as well as "in the Gulf of Guinea and (in) the Lake Chad region with all partners committed to stability and the fight against terrorism."

On February 17, noting that "the political and operational conditions were no longer met to remain engaged in Mali," France decided to reorganize the Barkhane operation "outside of Malian territory," the Elysée recalled.

The military presence in the Sahel will be halved by the end of the year, to 2,500 soldiers. Niger has agreed to maintain an air base in Niamey and to provide 250 soldiers for its military operations on the Malian border.

Chad will continue to host a French presence in N'Djamena and France hopes to retain a contingent of special forces in Ouagadougou, the capital of Burkina Faso.

Pushed out by a hostile Malian junta, the French have transferred all their holdings to the Malian army over the past six months, the last of which was in Gao (North) on Monday.

In total, France has had to remove from Mali some 4,000 containers and a thousand vehicles, including hundreds of armored vehicles, while the Sahel is experiencing an upsurge in violence, which the Russian paramilitary group Wagner, a new ally of Bamako, is struggling to contain.

More than 2,000 civilians have been killed in Mali, Niger and Burkina Faso since the beginning of the year, which is already more than the 2,021 recorded for the whole of 2021, according to AFP's calculations based on a compilation by the specialized NGO Acled.

In nine years of presence in the Sahel, the French army has lost 59 soldiers. 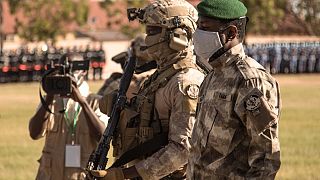