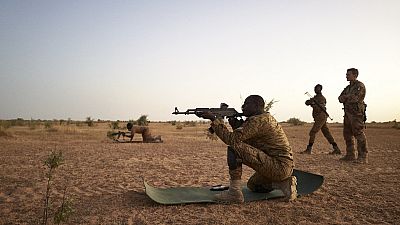 Two human rights organizations have denounced the "summary and extrajudicial executions" of "more than 40" people" carried out in early August in Tougouri, in northern Burkina Faso, involving, according to them, the Burkinabe armed forces, in two statements published Sunday.

The government "refuted" these "allegations" while indicating that the army had initiated "an investigation to verify the veracity and accuracy of these allegations.

"The Collective Against Impunity and Stigmatization of Communities (CISC) has been informed since Monday, August 8, by several witnesses and relatives of victims in the Tougouri commune, specifically in the village of Taffogo in the Centre-North region, of several cases of abductions followed by summary and extrajudicial executions," the human rights organization said in a statement.

"In total, more than 40 bodies were later found along the Taffogo-Bouroum road," CISC said, adding that "all of the people killed had their hands tied and were blindfolded.

According to the organization, corroborating testimonies describe "the alleged perpetrators of these abductions followed by systematic executions as elements of the Defense and Security Forces (FDS) dressed in black and hooded".

Estimating, for its part, that "more than fifty unarmed civilians" were "abducted in Tougouri and summarily executed on the road to Bouroum by the FDS," the Observatory for Human Dignity (ODH) "condemned with the utmost energy these barbaric acts, unworthy of our time.

"The authorities are being strongly challenged about the resurgence of these iniquitous, barbaric practices, unworthy of a republican army and which have contributed to plunging Burkina Faso into this situation of security crisis," the organization said.

The collective called on "certain elements of the FDS to stop the practice of kidnapping civilians with their bare hands followed by summary and extrajudicial executions under the false pretext of fighting terrorism.

He called on the head of state to "reframe the action of those soldiers who summarize the fight against terrorism to a simple extermination of villages occupied by a specific community.

"The government refutes and condemns, with the utmost energy, these allegations which discredit the army which remains republican and resolutely committed to the fight against terrorism and to guaranteeing the peace and security of the population," its spokesman, Lionel Bilgo, told AFP.

"The army has already launched an investigation to verify the veracity and accuracy of these allegations. If, however they are founded, the army (...) will draw all the consequences", assured Mr. Bilgo, who is also Minister of National Education.

In a statement issued at the end of June, the army had "reminded some of its elements, including volunteers for the defense of the country (civilian auxiliaries), to respect the principles of the army," Mr. Bilgo said.

Regularly accused of extrajudicial executions, the Burkinabe army has always denied this, sometimes pointing to armed groups that use military equipment.