Ten years on from the massacre at the Marikana platinum mine in South Africa justice remains a distant prospect.

The shootings, which killed 34 people in total and wounded 78 more on August 16, 2012, were the bloodiest police crackdown since the end of apartheid in 1994.

"But for us, it’s very painful because we know that we lost some of the parts of ourselves, now it seems the government doesn’t care about us. They are not even trying to do something, if they were trying something... It’s been ten years now, our lives could have long changed for the better, instead our lives have become worse", said shooting survivor Mzoxolo Magidiwana.

Some of the victims were caught in the fight between strikers from rival unions.

"We engaged with them, and they just made promises after promises, up until today, it’s ten years and they are doing absolutely nothing, for these ten families. (ed: whose families members were killed by other strikers and not the police)", denounced Aisha Fundi, widow of a security guard killed in the fighting.

Mgcineni 'Mambush' Noki became the face of the protests at the Marikana platinum mine northwest of Johannesburg. He was known as "the man with the green blanket".

Leading from the front, he addressed thousands of fellow mineworkers until he was struck dead.

His sister blames the police.

"The police are the ones that killed my br other, because they had said that police arrived and shot at them while they were at the koppie (ed: a small hill in a generally flat area), and there were lots of them (ed: police) there at the time", said Nolufefe Noki.

A decade on, the Independent Police Investigative Directorate, a police watchdog, said the case was "still under investigation".

The country's solicitor general, Fhedzisani Pandelani, said only around half of all claims made for compensation have been paid out so far. 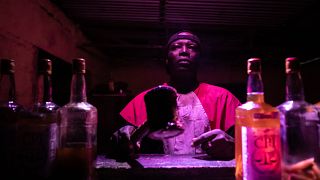