Algeria is interested in joining the BRICS, the economic bloc of developing countries which includes Brazil, Russia, India, China and South Africa. The appeal was publicly made by the northern African leader, Abdelmadjid Tebboune during a TV interview broadcast on Sunday, July 31.

Algeria's president said the club was an "economic and political power" that permitted to "move away from the attraction of the two poles".

According to the CIA's World Factbook, the bloc represents 42% of the world's population and accounts for over 31% of the world's GDP. The latest member to join the group was South Africa in 2011.

The leader took part in a video conference between the BRICS members at the end of June.

According to a senior french economist, Algeria is a heavyweight in the region notably for its energy resources but given the global geopolitical instability, the process could take a long time.

According to a senior french economist interviewed by a fellow journalist from RFI, if Algeria is a heavyweight in the region, notably for its energy resources which are of great interest to Russia and China, the process of Algeria's entry into the BRICS could be very gradual given the global geopolitical instability. 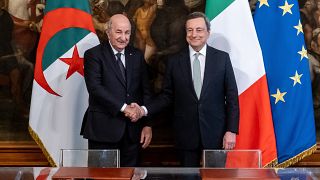